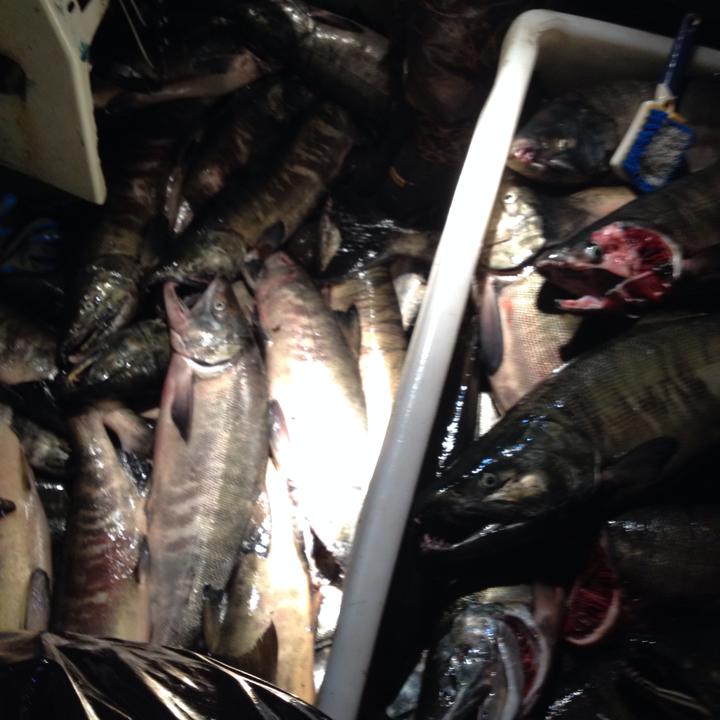 The week-45 South Sound chum test fishery at Apple Cove Point provided decent catches yesterday but nothing spectacular. They caught at total of 902 chum (plus 10 coho and 2 immature Chinook) in six sets which compares pretty well with historic week-45 catches. The tides were not ideal, ebbing during all but the first set. The proportion of females in their sample rose this week to 59%. The overall catch appeared to have more small fish, scales samples had not been delivered to the WDFW scale lab in time enough to be shared at this time, so we won’t have the age distribution. Many of the fish were still quite bright.

Total Tribal catch to date is  94,855 fish. Tribal catches appeared to be lower this week for the northern tribes.  Squaxin Island Tribe was the only tribe to be showing a substantial increase in catches.  Squaxin total catch as of November 7th is 32,405 chum.

Based on the Week 45 models and regional catch data the Tribes and WDFW agreed to update the runsize to 600,000.  This is down 60,000 from Week 44.  This decrease in runsize adjusts the Treaty share to 268,959 and the Non-Treaty Commercial hare to 261,476. Leaving approximately 174K left of Treaty and 112K left for Non-treaty commercial to harvest.

Fall Chinook have begun to arrive at the Tumwater Falls Hatchery.   Washington Fish and Wildlife (WDFW) post weekly  In-Season Hatchery Escapement Reports online through out the year.  Current year escapement updates are available along with past years reports.

As of Wednesday September 3rd, Tumwater Falls Hatchery has reported a return of 60 adult Fall Chinook so far.  Generally Tumwater Falls Chinook  will begin to enter the Deschutes River in late August continuing through October.   WDFW staff will begin random spawning of 2500 Chinook (1:1 male to female ratio) in late September through late October for collection of broodstock for continued hatchery production. Peak spawning is mid-October.  Spawning occurs about three times a week. Visitors are welcome to watch WDFW staff spawn Chinook at the Tumwater Falls Hatchery.

The fishery has slowed way down.  Earlier this week Salish Seafoods reported buying about 100 1bs. of Chinook for one night.

Chinook catches from Budd Inlet and Marine Areas 13D as of September 2nd: 9800 at an average of 13.5 lbs per fish.