Thursday November 14th, 2013 was the final day of test fishing for South Sound fall chum at Apple Cove Point. They got a bit of a late start after some mechanical problems with the skiff, but eventually managed to get in 5 sets. Catches were low, as might be expected for week 46. They caught 143 chum (plus 2 coho and 3 immature Chinook) in 5 sets, for a catch-per-set of just 29 chum.

Apple Cove Test fishery ISU models ranged from 543K to 637K.  The ISU models using WDFW purse seine catch data are a bit higher than the Test Fishery’s.  They range from 652-720K.  Regional catches for Tribes appeared to decline through out the Puget Sound with the exception of Squaxin Island Tribe. Puyallup reported that there are very few chum returning to the river.  Winter chum  are beginning to show up in the Nisqually. Current catch for Squaxin Island Tribe  as of November 16th is at 67, 071 chum.

Totten Inlet and Skookum Inlet are at escapement.  The last Kennedy Creek stream survey on November 14th resulted in 11,890 live and 1,882 dead.   We are seeing a good number of chum in Eld Inlet as well as in Perry, McLane, and Swift creeks.  Eld is well on its way to escapement. 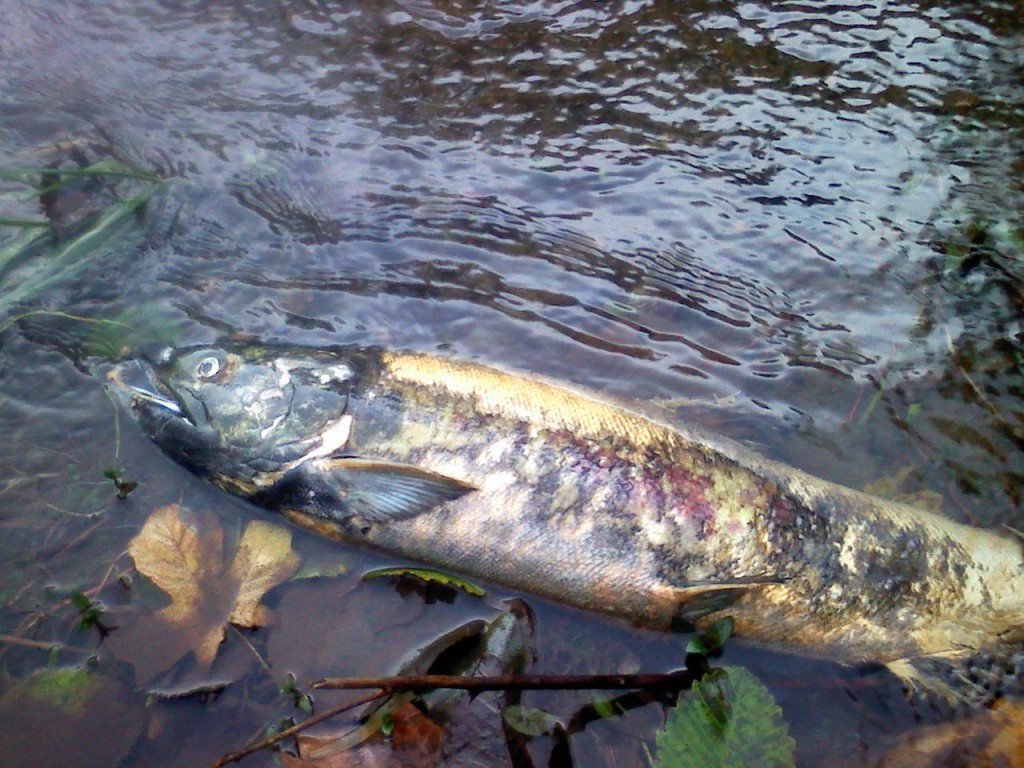 Thousands of chum salmon have started to make their journey up Kennedy Creek to spawn.  The past weeks small rain events have push this fish out of the estuary in to the spawning grounds.    It’s great to see the chum are here.

Squaxin Island Tribe treaty fisheries do target chum destined for Totten inlet streams.   The fishery is managed according to  escapement requirements for stocks that are intercepted.    The Totten Inlet escapement goal for this year is 11, 500 chum. 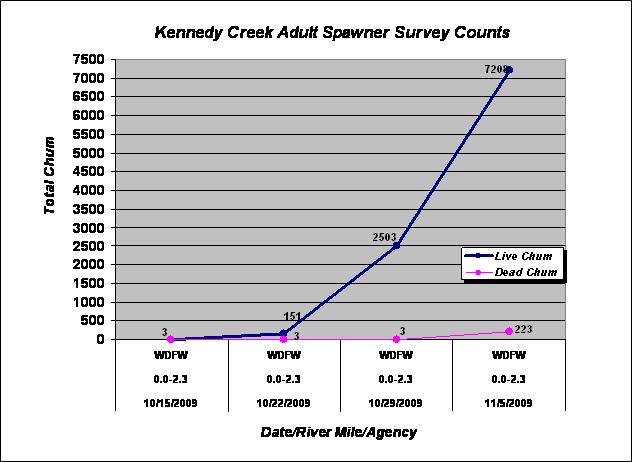 The trail is open to the public from 10 am to 4 pm on the following days in November: 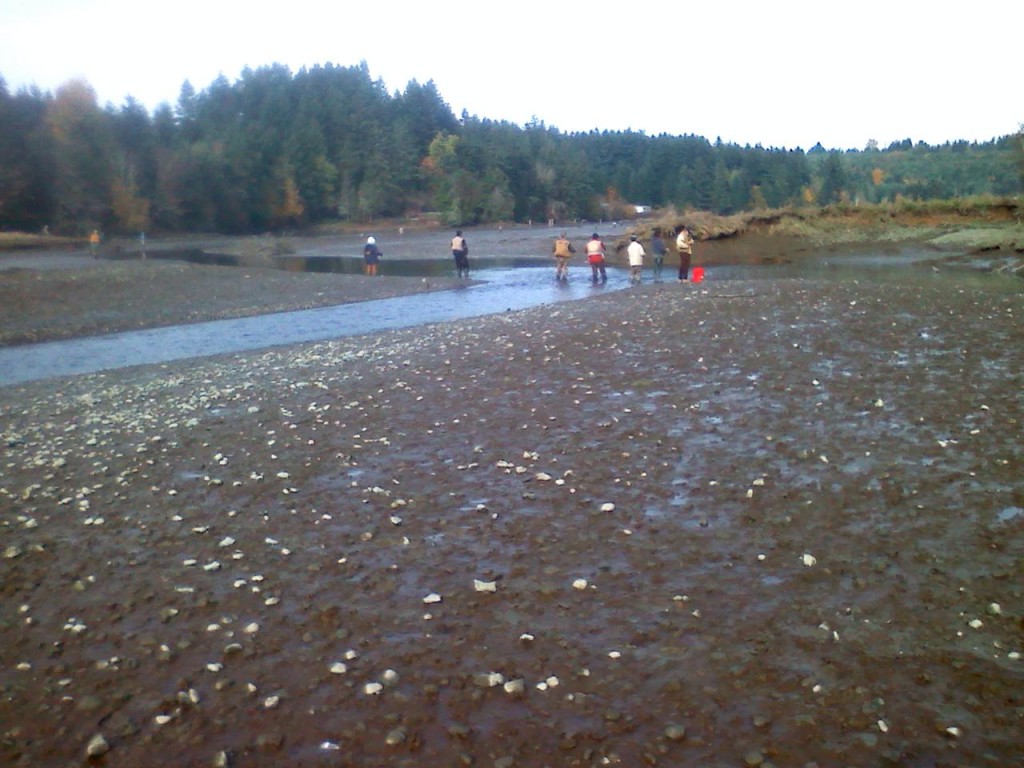 Chum anglers at the mouth of Kennedy Creek 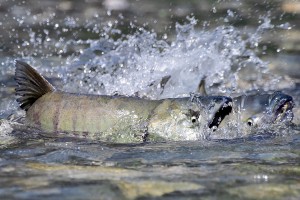 November is an excellent time to view adult chum salmon making their journey to spawn up South Puget Sound streams.  Two locations for prime view are at the Kennedy Creek Salmon Trail and the McLane Nature Trail.

Kennedy Creek Trail is open to the public from 10 am to 4 pm on the following days in November: 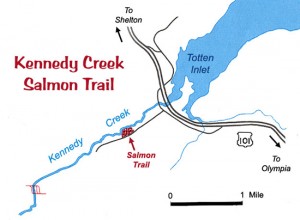 McLane Nature Trail is open to the public daily during day light hours.  The gate to the park closes a dusk. 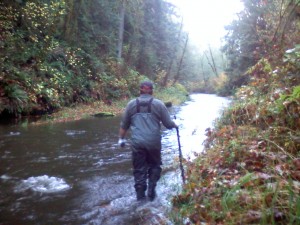 Chum salmon are beginning to make their way up Kennedy Creek.  This weeks stream surveys have shown increased adult chum with an estimate of 6,262 live and 264 dead chum from the Kennedy Creek falls to the mouth down at Highway 101. 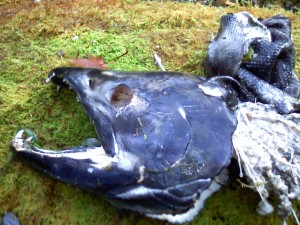 With this increase of adult chum on the spawning grounds of Kennedy Creek, Squaxin Natural Resources will have a 24 hour Chum fishery in Totten Inlet and Pickering Passage 4:00pm Friday November 7th through 4:00pm Saturday November 8th.

Detailed Regulations are available below and at the Squaxin Island Tribe Website. 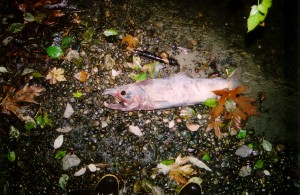 As of 9 AM Sunday October 26, the Squaxin Island Tribe suspended all directed salmon fisheries to ensure that Totten Inlet meets its escapement goal. 2008 Escapement goal for Totten Inlet is 14,400 chum. On Wednesday October 29 Squaxin NR staff walked Kennedy Creek and only counted 1922 live and 55 dead chum. 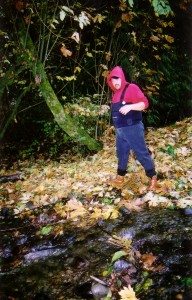 These numbers are very low; normally we are seeing 4,000 to 8,000 chums in Kennedy Creek by this week.  We are assuming that very low flows (lack of rain) are contributing to the low counts.  We are optimistic that with current weather forecast for the up coming week that chum will start to move through the system.

Squaxin Island Tribe Fall Chum Fisheries are based on in-season escapement numbers for each of our inlets.   For example, if this weeks Kennedy Creek stream counts were well on the way to the escapement goal,  we would have had an opening this week.

At this time we will be holding off any scheduled Fall Chum fisheries until we get another count on Kennedy Creek next week.  We will be going out to Kennedy to survey early next week.