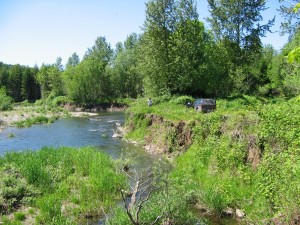 Weyerhaeuser published a report in June 2009 in the Journal of American Water Resources Association (Volume 45, Number 3, Pages 793-808) detailing 30 years of turbidity data collected in the upper reaches of the Deschutes (WA) Watershed.  To my knowledge, it is the longest water quality study on private forestlands in the Pacific Northwest.

In the mainstem river, the authors reported a consistent decline in winter turbidity levels over the 30 year period of record.  They attributed the decline to improvements in road construction and maintenance practices over the years.  The improvements were particularly extensive after the record January 1990 flood and the associated culvert failures and massive landslides in the Huckleberry Creek Basin and elsewhere.  Trends in spring, summer and fall turbidity levels were not evident.

The documented improvements in turbidity do not seem to directly translate into improved spawning habitat.  In 2004, Squaxin repeated a 1992 and 1995 study in the upper watershed of fine sediment in spawning gravel.  Levels climbed from 12% to 15% to 17%.  Spawning gravel with less than 12% fines is considered in good condition and over 17% is considered harmful to egg incubation and fry emergence.

While turbidity levels may be lower now, enough fine sediment is still moving downstream to increase impairment of salmon reproduction.  Even with all the forest road improvements made by Weyerhaeuser, another Squaxin report concluded that as of 2003, 50% of the fine sediment entering the river in the upper watershed was still anthropogenic in nature.