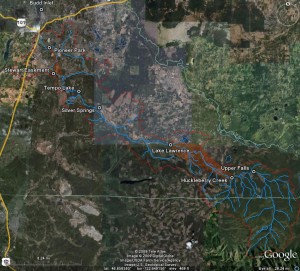 I toured the Deschutes Watershed on June 4th with 17 other members of the Deschutes Advisory Group.  The group is charged with implementing measures to address water quality issues identified in the DOE TMDL technical report. 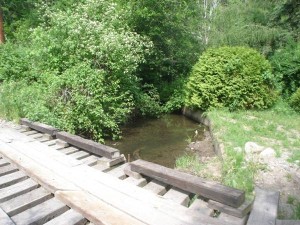 One highlight of the tour was stopping at the mouth of Huckleberry Creek not far downstream from the upper Deschutes falls.  Prior to a 1990 rain storm and subsequent landslide on Weyerhaeuser property, about 10% of all returning coho in the Deschutes River system spawned in Huckleberry Creek.

We spoke with Peter Schmid, president of the local homeowners association.  He described how sediment (likely still from the 1990 landslide) continues to aggrade the Huckleberry channel.  He said the channel is now at least three feet shallower than it used to be.  He asserted that was the cause of the ongoing flooding issues the community faces.  When asked about salmon, Peter reported that he has seen none in the last couple years–not in Huckleberry Creek and not in front of his house in the mainstem Deschutes River. 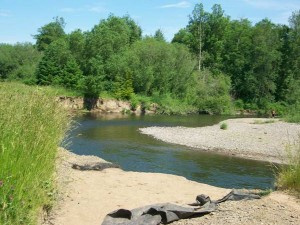 At another stop in Pioneer Park, we saw first hand what a river likes to do.  A new bend in the stream channel formed during last winter’s storms.   It took out a portion of the gravel path leading west from the parking lot near the artesian well.   It will be interesting to see how tolerant the City of Tumwater and park users will be to letting a river be a river.  On a very hot June 4th, the inner tubers at least seemed to relish the new twist in the stream channel.