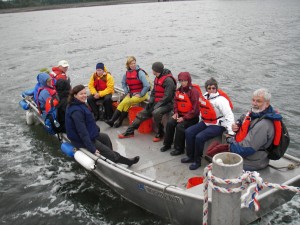 The Squaxin Island Tribe and Taylor Shellfish hosted the 2009 Puget Sound Institute for Journalism and Natural Resources on July 12th.  Fifteen journalists from around the county gathered to learn about the Tribe’s relationship with shellfish and its commercial production in South Sound.  Lynda Mapes from the Seattle Times led the tour.

Charlene Krise, Tribal Council member and Museum Director explained Tribal history at the Squaxin museum.  Then the journalists went out to Chapman Cove in Oakland Bay to dig clams on Taylor property and hear firsthand about water quality issues.   The day ended with Charlene welcoming the journalists to Squaxin Island by asking them to maintain a positive frame of mind while on the island.  A shellfish feast ensued!