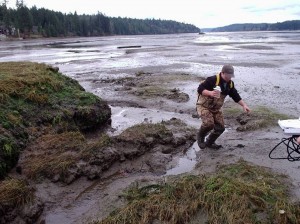 State and Tribal scientists use fecal bacteria (FC) as an indicator of water pollution in Oakland Bay.  In 2006 during the summer months, the bacteria concentration in the water column at the head of Oakland Bay skyrocketed and restricted commercial harvest in some shellfish beds.  In in the first half of the summer of 2009, the concentrations are much lower, in spite of the hot weather we have had and a massive die-off of clams earlier in the year.  That’s good news for the Tribe, the shellfish industry and the greater community. 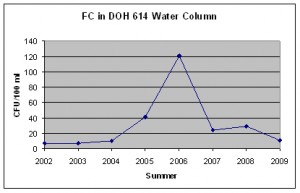 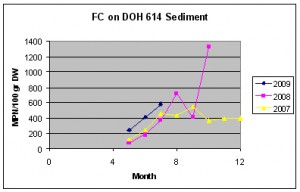 At the end of the summer, we will analyze more data including wind speed and direction to try and explain this year’s fecal bacteria counts.