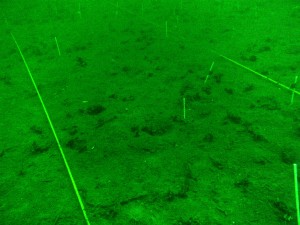 On March 17th the Squaxin Island shellfish department began installation of a sub-tidal geoduck “show-plot” near the North end of Hartstene Island
(photo 1). This is useful in sub-tidal geoduck biomass surveys as it allows us to properly calibrate our surveys to local variations and account for temporal variability in show factors. These show plots are used to determine the number of geoduck that are actually present in a given area but that remain unseen or do not “show” (see photo 2). 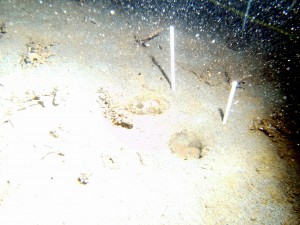 Divers mark individual geoduck shows over time to determine the number of total geoducks in a defined area (photo 3). Once this number is known we can then return to count the number of showing geoducks and determine the show factor for that given day when conducting local geoduck surveys. This is just one of the many steps involved in surveying a subtidal geoduck tract. 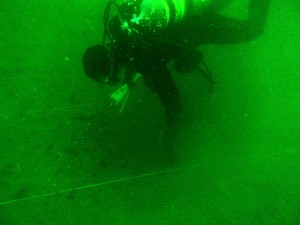 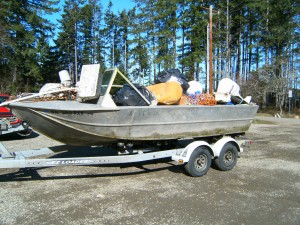 Natural Resources Department Boat Loaded With Trash From The Island

Twice a year PCSGA hosts beach cleanup events at the Arcadia launch.  Every year dumpsters are filled with various types of debris that has washed ashore.  Some of the source of this trash is from aquaculture activities and much of it  is from other sources.

Squaxin Island employees and tribal members helped clean up the entire shoreline of Squaxin Island this year.  We had several boat loads of trash come off the island and everyone’s help was greatly appreciated.  Thanks to all for keeping Squaxin Island clean! 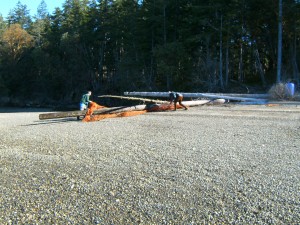 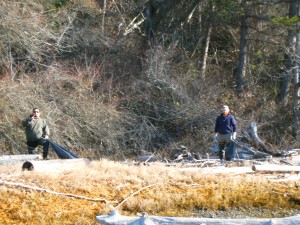 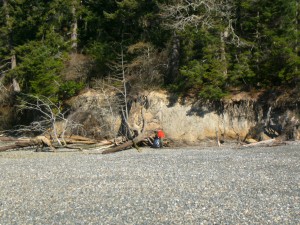 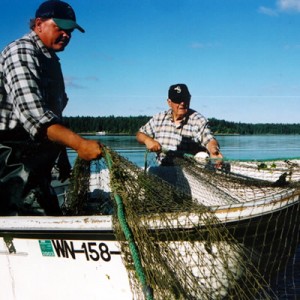 We’re marking an important milestone in cooperative salmon co-management this year. It’s the 25th anniversary of the North of Falcon process for setting treaty tribal and non-Indian fishing seasons in western Washington.

We’ve sure come a long ways in that time.

The 1974 Boldt decision made it clear: Treaty Indian tribes in western Washington had reserved rights to half of the harvestable salmon returning to state waters and were equal partners  […]

Extremely cold weather combined with very low tides in November 2008 or the unusually large influxs of sediment from the December 2008 and January 2009 storms seems to be taking a toll on clams in Oakland Bay.  Growers report that there are many more dead clams than usual–maybe twice the ususal number especially in upper Oakland Bay and Chapman Cove.

The increase in clam mortality will set up an interesting experiment this summer.  There seems to be a relationship between clams dying and summer nutrient levels/bacteria concentrations in Oakland Bay.  If the hypothesis is correct, this summer’s bacteria concentrations should be higher than 2008 or 2007.   A hot and sunny summer will likely enhance the increase.  We will have the results of the experiment by October 2009.

The Squaxin Island Tribe released their winter 2008-09 water sampling results to the Oakland Bay Clean Water District Advisory Committee on March 4th.  Five samples were collected at nine stream mouths between October 2008 and February 2009.  Two of the sampling days, 11/12 and 1/7, occurred during major storm events.  All the samples were analyzed for fecal coliform bacteria at the Department of Ecology Manchester Lab.

The sampling results from the storm days were much higher than the non-storm days.  This is a very common pattern in Western Washington because stormwater picks up large quantities of bacteria as it moves across the landscape.

The results indicate that Uncle John Creek is still a leading source of non-point water pollution entering Oakland Bay.  While there have been significant improvements over the last couple years that have taken Chapman Cove (downstream of Uncle John Creek) off the Department of Health’s water quality threatened list, there is still need for additional improvement to meet water quality standards.

Other creeks like Shelton, Malaney and Goldsborough also play a significant role in moving bacteria from the uplands to marine water.  Their contributions to water pollution must also be investigated and reduced in the near future to meet water quality standards.

The Steering Committee for the second South Sound Science Symposium to be held May 6th, 2009 at the Little Creek Resort Casino released a call for abstracts today.  The details can be found here.

In 150 interviews sponsored by the Sa-Heh-Wa-Mish Stewardship Initiative, we found that residents living around Oakland Bay are having a hard time connecting their actions at home with water quality in the bay.  Owners of homes with septic systems that have not been checked in the last five years see no reason to inspect their systems.  Most livestock owners feel that they have so few animals that the waste their animals produce could not possibly harm Oakland Bay.  Yet the water quality results tell a different story–we know for a fact that human and ruminant fecal bacteria are ubiquitous.

The Oakland Bay results mirror surveys from elsewhere around Puget Sound.  That surprised us because we think that the residents around Oakland Bay have a closer relationship to the bay than might be found elsewhere around Puget Sound.  We thought the environmental connections would be more obvious.  Oakland Bay residents at least see it everyday when they drive past, many have jobs dependent upon the shellfish or timber industries, or they recreate in some form or fashion there.

With such close contact, the fact that local residents do not connect their actions at home with the health of Oakland Bay does not bode well for the rest of Puget Sound.  We would expect that elsewhere where residents have far less awareness, it will be an even tougher sell to improve land stewardship.  If we can’t build an effective program in Oakland Bay, we won’t be able to do it elsewhere!

For more info, the full results of the interviews can be downloaded from this site.