Yesterday we were able to get the traps  fishing again only to let the blow out panels lose today. With another big spring storm scheduled to hit Western Washington early Friday morning, we are preparing for the worst and want to save Skookum and Cranberry traps from complete destruction.

The weir panel traps are designed to blow out when  there is higher water and debris gathers at the panel.  Add more than an inch of rain and windblown debris and the force on can snap wire, bend T-post and break panels.

Fortunately we installed these traps a week and half earlier than normal.  Generally we are not seeing out-migrating coho smolt for another week.  We plan to get things back to normal early next week and begin installing Sherwood and Mill Creek traps.

Wind and Rain from the spring storm that hit Western Washington Sunday and Monday blew out smolt traps temporarily. As of 7 am Monday March 29th and estimated 1.3 inches of rain fell in Kamilche since Saturday. 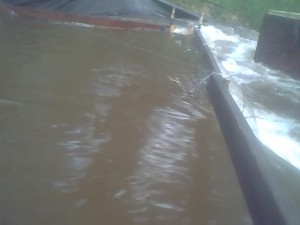 We had water flowing over the top of the weir panels and one tree fell over the screw trap diversion panels . 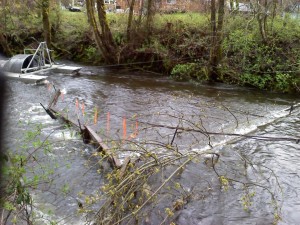 A wind blown tree over Goldsborough

In a few days after the weather has calmed and the creek levels lower  we will get the traps buttoned back up and we will continue installing our remaining two traps.

The Squaxin Island Natural Resources began installing smolt traps in five local streams this week.   This will be the eleventh year the Tribe has been doing smolt trap studies. 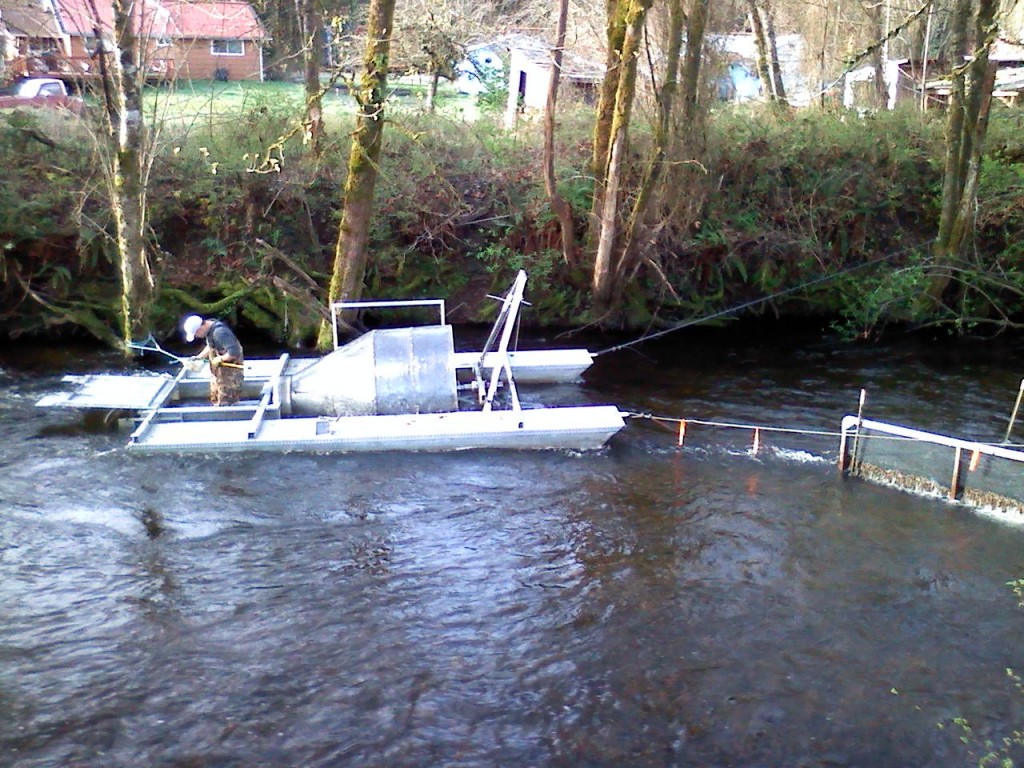 Project objectives of  smolt trapping are to determine current levels of natural coho  production and smolt outmigration timing.  In addition, the information collected on outmigrants can be used to form relevant spawning escapement goals.

Once traps are installed they are checked daily.  All Oncorhynchus spp. (salmon species) that are captured will be placed into a bucket containing MS-222 (Tricaine Methanesulfonate) and water, fork length recorded on to a data sheet.  Fish exposed to the MS-222 will then be placed into a recovery bucket of stream water and released after noticeable revival from MS-222.  Each fish will be released in a low flow area of the stream, close to the area of capture.  Oncorhynchus kisutch (coho) will be our primary focus of research.  Organisms other than Oncorhynchus spp. caught in the smolt traps will be identified, recorded and released.

Trapping continues from late March through the end of June. In the creeks around the South Puget Sound, coho smolt outmigration  occurs  between the months of April through June. 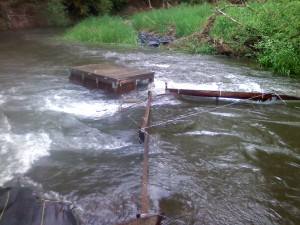 This week’s heavy rain that began falling Monday May 4th through today (Thursday May 7th) made for some high flowing South Puget Sound creeks.  After Monday night, 3 of the 4 weir smolt traps that Squaxin operates have blown out.

Luckily the traps are designed to blow out in high flow events.  Each trap has “blow out panels”, a section of the panel is held together by zip ties that eventually “pops” under enough pressure.  At least that’s what we hope happens. Sometimes the force of the creek will bend the T-post or snap the panels all together or even scour the creek bed under the panels.   We are lucky with this rain event; we didn’t have a whole lot of logs or debris washing out the entire trap.

Even the screw trap on Goldsborough Creek is not functioning properly.  We are getting logs jammed in the trap and the diversion panels have been washed out.

Shelton accumulative rainfall since Monday is 3.62″,   that’s a lot of water raging down our little creeks.

Below it a snap shot of how much discharge Goldsborough Creek has had in the past couple of days. 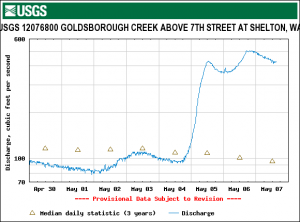 The rainy weather seems to be tapering off, so we hope to have the traps back fishing in a couple of days. 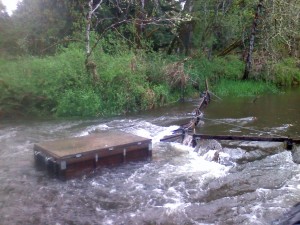 As of Friday May 8th all of our traps are back to fishing for coho smolts, with the exception of Mill Creek.  Water flow at Mill still is high and appears to be a couple days until it is back to fishing. 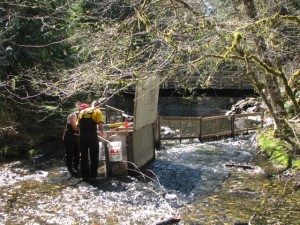 The project objectives include using weir panel and Screw traps to enumerate and monitor downstream migration of coho salmon smolts, providing data for estimation of natural coho production and for the formation of relevant spawning escapement goals for Deep South Puget Sound region.   This will be the 10th year that SINR has conducted smolt trapping studies. 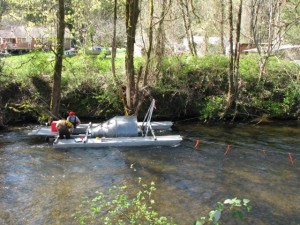 South Puget Sound coho smolt outmigration timing occurs during the spring from April through June.  Peak outmigration of coho smolt in the region varies from creek to creek. The peak ranges from late April through the middle of May. All salmonids captured in the traps are enumerated and measured; non salmonid species are identified and enumerated.  Species other than coho encountered in the trap are:  cutthroat, steelhead, chum, lamprey, sculpin, dace, peamouth, shiner and threespine stickleback. 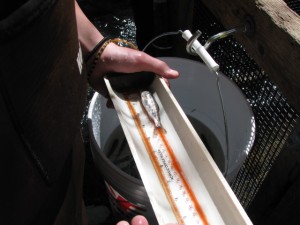 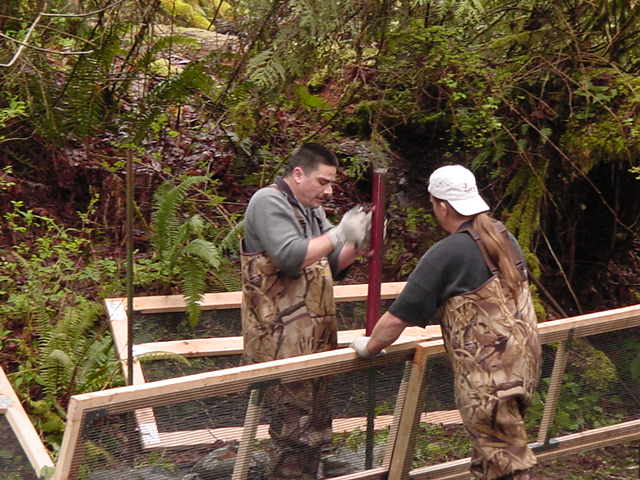 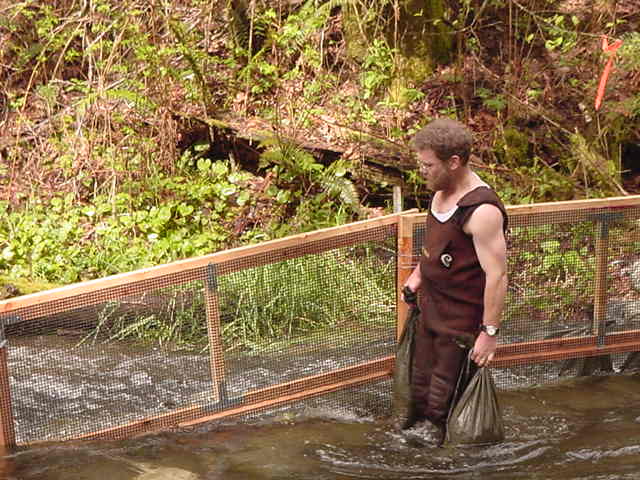 Over the next couple of weeks the Finfish program will be installing smolt traps throughout six South Sound streams. This will be the NR Departments 10th year of smolt trapping studies. Please come and join us in the fun of installing smolt traps. We could use any help that we can get to install as quickly as possible. I can guarantee that you will have a great time working hard outdoors with your fellow cohorts…and maybe some nice weather too. Please contact Doyle Foster at 360-432-3859 or cell 360-239-4893 for specific details of when and where we will be during the week. 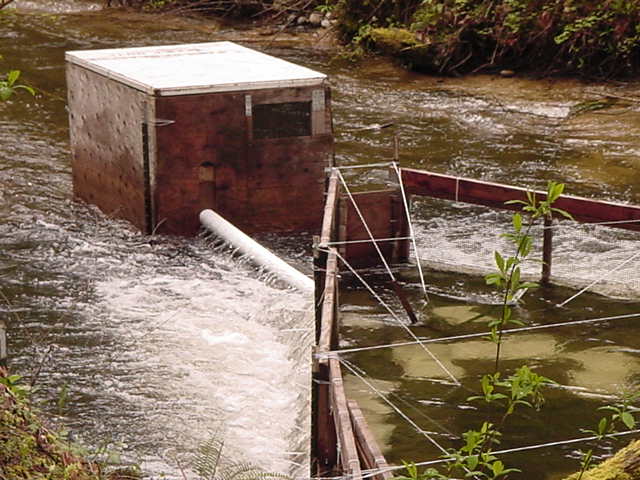 Thanks and hope to see you all out in the stream with us!!!!