Early this October natural resources staff tagged 600 adult coho in Budd, Case and Hammersley Inlets with spaghetti tags. This easily visible tag is inserted just below the dorsal fin. Each tag contains a unique identification number and a phone number to the natural resources department. 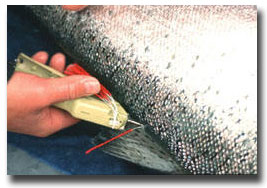 Tag being inserted into an adult salmon.

These fish were captured by natural resources staff in the lower ends of the inlets in areas that are generally closed to Tribal fisheries during the coho managment season. The purpose of this study is to track when these fish move out of the inlets and where they ultimately end up.

More information on mangament for coho can be found at:

Several weeks after tagging the Department began recieving calls from several grocery stores in St. Louis Missouri reporting Squaxin tags on salmon they were about to fillet. This was followed by a phone call from a fish processing plant in Missouri that had found numerous Squaxin tags in shipments of fish they were buying. According to the processing plant manager fish bought from South Puget Sound feed three quarters of the state of Missouri.