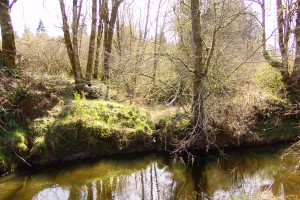 The Squaxin Island Tribe’s Natural Resources Department is doing what it can to restore riparian areas in order to protect salmon runs and create habitat for wildlife. In February of 2007 the Natural Resources Department implemented a stream bank restoration project on Skookum Creek next to a series of engineered log jams that were implemented by the Tribe as part of an in-stream restoration project. Approximately 1,500 live willow and dogwood stakes were planted in an effort to stabilize the bank and provide shade to the stream. 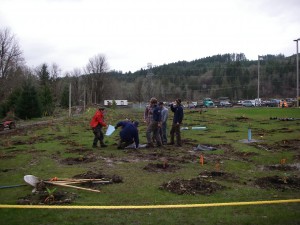 In March of 2007 The Department implemented a riparian restoration project along Skookum Creek between river miles 1-2. Over 2,000 native trees and shrubs were planted and an irrigation system was installed in order to increase survival rates. Survival rates the first year were 97 percent!

In February of 2008 The Department planted 400 native shrubs across from the 2007 stream bank restoration project site on Skookum Creek to continue restoration efforts along the Creek adjacent to the engineered log jams that were installed. 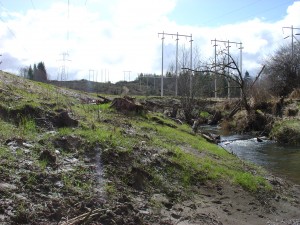 This month The Department has installed native shrubs at all the mentioned project sites as supplemental plantings to offset mortalities and in order to increase plant density and diversity.

Streamside vegetation provides shade, cover, and nutrient input. Additionally, trees eventually will contribute to wood recruitment in streams which is important for forming log jams, creating stream complexity and providing habitat for juvenile fish. As the wood ages and decomposes it also provides habitat for macro invertebrates (aquatic bugs) which is food for juvenile salmon and resident trout species. Streamside vegetation also provides bank stability and hinders sediment input which can be detrimental to salmon eggs in the gravel.