The Squaxin Island Tribe, working with our partner the South Puget Sound Salmon Enhancement Group http://spsseg.org/, recently completed a project to remove a boat ramp and large concrete structure that had  been used as a boat basin.

Both of these structures blocked the natural movement of sediment down the beach. Why is this important? This beach materiel is used by sand lance and surf smelt to lay their eggs. These, and other fish, are called Forage Fish because they provide a critically important food base for salmon and other creatures in Puget Sound. Blocking natural sediment movement causes the beach to cut down decreasing the available space for forage fish to spawn. 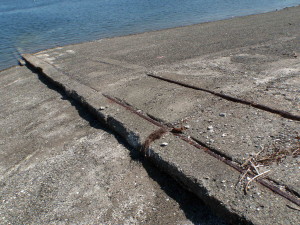 Before: Boat ramp with marine railway.  The concrete blocks sediment from moving as shown by the elevation difference on either side. 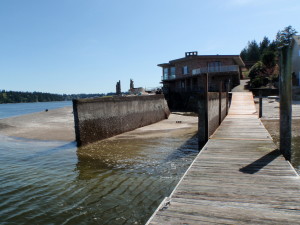 Before: Boat basin that had been used as a “dry dock” by the previous owner. This structure blocked sediment from moving down the beach.

The energy generated from waves breaking along the beach at an angle moves sand and sediment along the shoreline. We call areas where this happens over long stretches of beach Drift Cells as the sediment tends to drift or move in one direction. Structures located on the beach can block this sediment movement causing the beach to pile up on one side and down cut on the other.

In the early 2000’s the Tribe initiated a project to identify and rate beach sediment sources within Totten Inlet. The drift cell along the project area was found to be one of the longest in all of South Sound. This drift cell was rated as having a good sediment supply, called feeder bluffs as they feed sediment to the drift cells, and was found to be in generally good shape. Three structures were identified that blocked sediment movement down the beach. The first of these, the Arcadia Point boat launch, was fixed in 2011 when a solid concrete ramp was replaced with one that had channels that allow sediment to flow through. 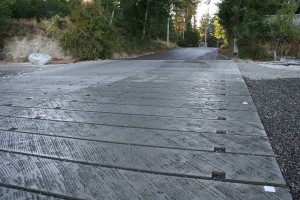 Arcadia Point Boat Launch. Sediment channels are placed between concrete planks allowing sediment to flow through from left to right.

The other two structures were the Collier boat ramp and jetty. Sediment can now move unimpeded on this over five mile long drift cell. 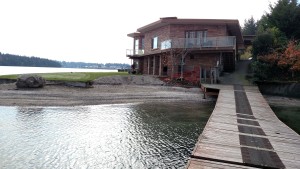 After: The boat basin has been removed. Sediment can now flow down the beach unimpeded.

You can watch a YouTube video showing the construction project here: