This picture was taken by Natanya Epstein while at a training in Portland, Oregon hosted by the Xerces Society. The training was for Fresh water mussels protocols and proper survey techniques. 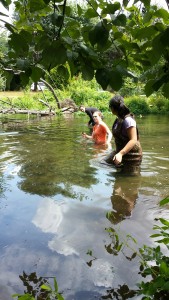 SIT staff attended this Fresh Water Mussel survey training to prepare for future programs with tribal youth. The pictures above are from a training at Crystal Springs Creek in Portland, OR. Below are pictures from a our tribal youth pilot program at Mill Creek in Shelton, WA. The below pictures are from a pilot youth mussel survey program we started this summer to hopefully get money to fund next year for a tribal youth internship program. If we are awarded the funding we would be able to take tribal youth out to this kind of research again. 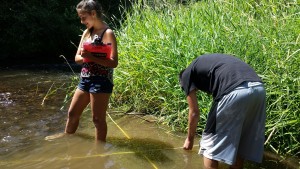 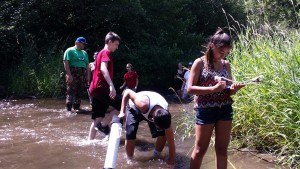 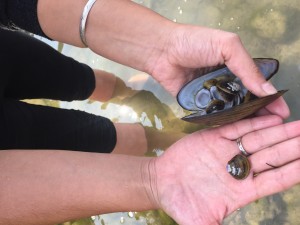 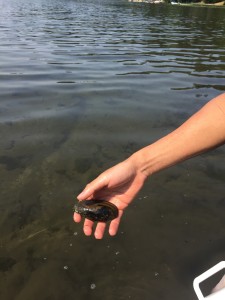 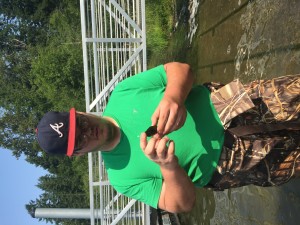 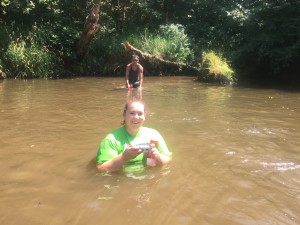 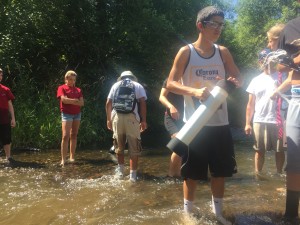 The Squaxin Island Tribal youth are having a great time in these pictures, having fun while also collecting vital data. Our group of youth ranging in ages from 13-20 surveyed Mill Creek in Shelton, WA to identify the presence and/or absence of fresh water mussels as well as stream habitat surveys. They are collecting data on a species that there is very little know about and at the same time introducing tribal youth to the wonderful world of science. The Fresh water mussels species we see most often is the Western Pearshell or Margaritifera falcata Fresh Water Mussel pictured below. 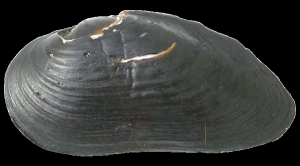 Pg.17  [Western freshwater ecosystems have suffered increased levels of alteration and exploitation since settlers first arrived more than 150 years ago. Mussels have been eliminated from portions of rivers and even entire watersheds through the combined effects of habitat loss, pollution, blockage of anadromous fish, and introduced species. The factors that seem to have had the greatest effect on western freshwater mussels include water availability, dams, introduced species, loss of host fish species, and the chronic effects of urbanization, agriculture, and logging on habitat quality. Global climate change will exacerbate the effects of many of these stressors on western ecosystems (see www.epa.gov/climatechange).

There is a critical need for greater research into freshwater mussel biology, distribution, status, and threats. This information is vital for effective conservation of western mussels. Specifically, there is a need to better understand the distribution, habitat, host fish species, life history, population structure, recruitment, and population trends of all western freshwater mussel species. More information is needed to understand the taxonomy of what is currently called the western Anodonta, and whether these animals can be identified by shell morphology. In addition, there is a need to understand how western freshwater mussels are affected by threats to water quality, habitat fragmentation, hydrologic alteration, global climate change, altered water levels, and loss or reduction of host fish. Increasing public and government awareness of the importance of freshwater mussels will contribute to effective conservation of these species in the West.]

An article from Wings magazine

A few lines from the study:

{Archeological records show that Native Americans have harvested mussels for at least ten thousand years. Their soft bodies were eaten, and their hard shells were used as spoons and hoes, crushed as temper to strengthen clay when firing pottery, and made into jewelry. The pearls created by some species of freshwater mussels were often strung into necklaces or used decoratively, inlaid as eyes into animal designs. Native Americans were not the only ones who were attracted to these gems. During the second half of the nineteenth century, pearl hunting became a big business, sparked in 1857 by the discovery in New Jersey of a pearl that sold for $2,500 —in excess of $50,000 today! The ensuing clamor for pearls was so intense that entire streams were stripped of their mussels.

To this day, the harvesting of mussels threatens some populations in the southeastern United States. Freshwater mussels remain in demand by the pearl industry, though not for their own pearls but for their shells. Pieces of the thick mussel shells are cut and placed inside marine oysters as seeds to stimulate the formation of oyster pearls. As important as this market has been, however, the greatest mussel-based industry was the manufacture of “pearl” buttons. Johann Boepple pioneered the craft, opening his first factory in Muscatine, Iowa, in 1891. Stamped out of mussel shells, the best buttons came from thick-shelled species such as the yellow sandshell (Lampsilis teres) and pistolgrip (Tritogonia verrucosa). At the time, there appeared to be an endless supply of these shiny, durable shells, and Boepple’s success inspired others to join the industry. According to the University of Tennessee’s Frank H. McClung Museum, by 1912 there were nearly two hundred button factories in the United States. Mussels remained at the heart of the industry until the 1940s, when they were replaced by plastics.}

{Changes in climate are occurring around the world and the effects on ecosystems will vary, depending on the extent and nature of these changes. In northern Europe, experts predict that annual rainfall will increase significantly, along with dramatic storm events and flooding in the next 50–100 years. Scotland is a stronghold of the endangered freshwater pearl mussel, Margaritifera margaritifera (L.), and a number of populations may be threatened. For example, large floods have been shown to adversely affect mussels, and although these stochastic events were historically rare, they may now be occurring more often as a result of climate change. Populations may also be affected by a number of other factors, including predicted changes in temperature, sea level, habitat availability, host fish stocks and human activity. In this paper, we explain how climate change may impact M. margaritifera and discuss the general implications for the conservation management of this species.}

Western Freshwater Mussel Database: The Xerces Society and the Confederated Tribes of the Umatilla Indian Reservation have compiled a database of western freshwater mussel records for the following species and clades: Anodonta californiensis/nuttalliana, A. oregonensis/kennerlyi, Gonidea angulata, and Margaritifera falcata.  (Margaritifera falcata: is species we commonly see in our creeks, Mill Skookum and Goldsborough)