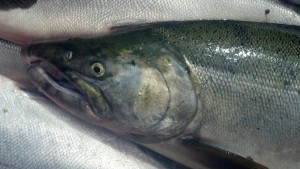 Fishing has been under way for the past few months, with what looks like a fair Chinook season and an above average coho season.  As of October 15th, our 88 licensed Tribal fishers have harvested 4,375 Chinook and 48,748 Coho.

This year the Budd Inlet Chinook fishery yielded 4,375 fish, below the ten-year average. Squaxin’s projected catch for Chinook is based on average catches from previous years, the predicted returning run-size to Tumwater Falls Hatchery, and the 3,500 Chinook escapement needed for the hatchery.  Escapement needs for the hatchery program were met this year. While other fisheries to the north harvest Deschutes fish, tribal and sport fisheries must contend with listed Chinook stocks of concern and are limited to a ceiling harvest rate.  Some tribes get only one to two days of fishing for their Chinook fisheries. Overall the run size was lower than expected and the Tribal fishery was down as well.

Squaxin coho catch is based on the previous year’s average harvest rates of net pen Coho. The harvest rate of Squaxin net pen Coho by Tribal fishers ranges from 94%-98%.  During the Coho fishery there are weekly in season update conference calls with the tribes and state to discuss regional catches and test fisheries from the straights and northern Salish Sea.  It is during these calls that an in-season update is made based on actual fishery results.    If a run size increases or decreases, the allocation of fish to tribes and the state change.

Squaxin Coho fisheries are unique in that the vast majority of the fish caught in 13D are net pen Coho with limited impacts on natural Coho due to the protected areas in the inlets.  By staying out of the inlets natural Coho have a better opportunity to escape into the creeks to spawn.  The Coho fishery through October 15th has harvested 48,748 Coho worth over $670,000. This is an above average outcome and suggests that there has been better ocean survival than previous years. 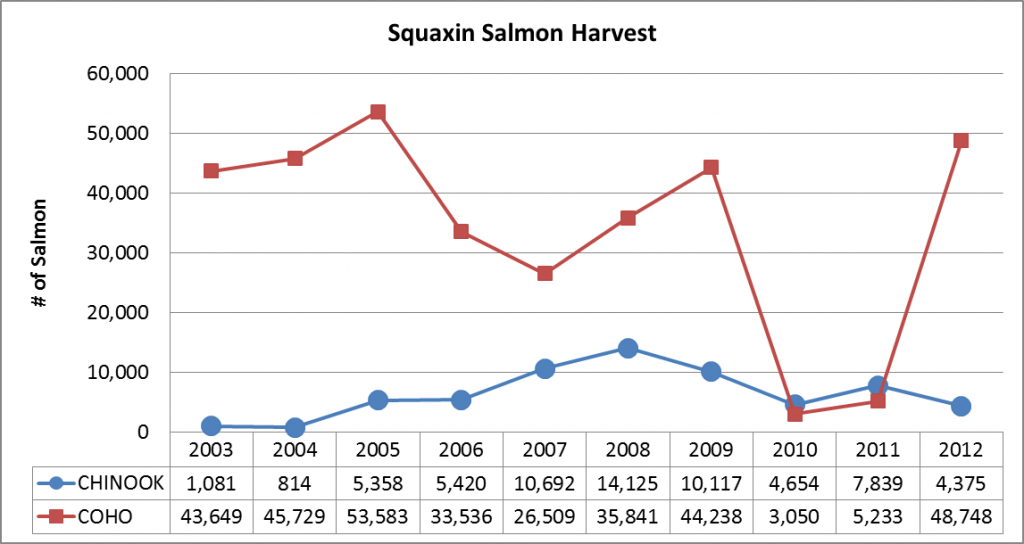 The results from this year’s fisheries will be used to plug back into fishery management decisions for next year. In the months of February through April, Squaxin Natural Resources takes part in the North of Falcon process, part of the Pacific Fishery Management Council.  This series of meetings gathers state, federal, and tribal fishery managers to plan Washington coastal, Strait of Juan de Fuca, and Puget Sound recreational and commercial salmon fisheries. Tribal and State fisheries managers negotiate and agree on harvest impacts on forecasted returns, as well as scheduled fisheries.