The Squaxin Island Tribe in cooperation with the Department of Fish and Wildlife released about 100,000 coho fry in the upper Deschutes yesterday.   The purpose was not necessarily to increase the number of smolts leaving the system next year, but to identify key locations where the fry rear over the summer.  The information will be used to prioritize habitat protection and restoration actions.  The last time such a study was reported was in 1987, and the river has changed considerably since then. 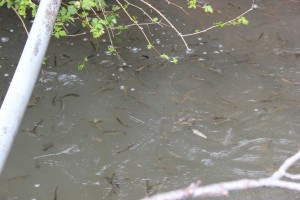