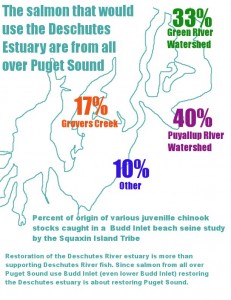 Salmon smolts from numerous Puget Sound river systems migrate into Budd Inlet. The Squaxin Island Tribe has been monitoring salmon usage there and we’ve found extensive use by juvenile salmon all over the region.

This isn’t really surprising. Deep south Puget Sound is one of the most productive areas in the world for the food juvenile salmon need. Its natural that they would evolve to migrate to a place with a lot of food before heading out to the ocean. To increase the habitat they prefer here would only benefit them.

The image above is based on coded wire tag (CWT) data taken from salmon found in Budd Inlet. CWTs are tiny pieces of metal inserted into the snouts of hatchery salmon so scientists can determine their origin.

While its likely there were some Deschutes origin chinook that were caught in the study, we can’t quantify their use accurately since they aren’t fitted with CWTs. We did see a surge in fish soon after the Deschutes hatchery made their releases.

An article in the right hand column of page 12 of this magazine summarizes the tribe’s research in juvenile salmon usage in Budd Inlet and throughout deep South Sound.