This ruling makes logical sense.  It eliminates the possibility that developers might make significant upfront investments and suddenly find when it comes time to actually build houses, that no water is available.   The early timing of the determination eliminates potential conflicts between multiple water users, and between water users and instream flows.

The ruling will serve as a powerful new tool to protect our water resources from further over-appropriation.  This is especially true when this ruling is coupled with another recent decision from Kittitas County.  In that latter case, the Supreme Court ruled that securing a water supply involves more than determining how productive a well is.   The evaluation must also include a legal determination that senior water rights will not be impaired.

In sum:  when planning a subdivision, an early decision that water is legally available must be made.  The early and legal nature of the decision will protect both the financial investments of the developers and senior water rights including instream flows.

The decision in Knight v. City of Yelm can be found here.

The Kittitas decision can be found here (pdf file).

Here is a video featuring the speakers at the Budd/Deschutes Environmental Stewardship Coalition signing ceremony earlier this week.

UPDATE:  Lacey City Council unanimously passed a resolution to sign the MOU last night.  That means all have agreed and the signing ceremony on Nov. 29th is on.

The Olympia City Council voted unanimously to approve signing the MOU forming the Budd/Deschutes Environmental Stewardship Coalition tonight.  The City of Yelm and the Squaxin Island Tribal Council unanimously voted in favor last week.  If the City of Lacey approves the MOU this Thursday, there will be a signing ceremony at the Squaxin Museum on Nov. 29th at 3:30pm.

Here’s the video from that portion of last night’s meeting. 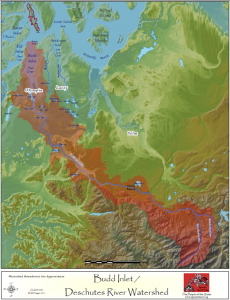 On-the-ground habitat restoration projects will be the focus of a new coalition to jumpstart salmon productivity in the Deschutes River watershed.  The Squaxin Island Tribe and the cities of Olympia, Lacey and Yelm are establishing the Deschutes Watershed Environmental Stewardship Coalition.

“The Deschutes coalition will be an ongoing alliance to fund and conduct on-the-ground projects to restore a healthy watershed,” said Andy Whitener, natural resources director for the tribe.  “The coalition will put words into actions and start restoring productivity to the Deschutes River.”

Initial projects are slated for the 197-acre farm on the Deschutes River near Lake Lawrence that the cities recently purchased as part of mitigation for their new water rights.

In the past, the Deschutes River was the largest producer of coho salmon in deep South Sound.  A landslide in 1990 destroyed the most productive coho tributary in the watershed.  “The impact of that landslide is still being felt throughout the watershed,” said John Konovsky, environmental program manager for the tribe.  “But we know the Deschutes can be a productive salmon stream again.”

“Thirty years ago, we were seeing coho returns in the tens of thousands, now we’re talking about coho runs in the hundreds,” said Jeff Dickison, assistant natural resources director.  “We need to get our hands dirty now to improve coho habitat and bring back stronger runs.”

Because the upper Deschutes River is relatively undeveloped – less than 10 percent has been converted to impervious surface – its still possible to restore salmon habitat and productivity.  “If we restore some habitat and give these fish half a chance, they’ll recover,” Dickison said.

“The tribe’s treaty rights, economy and way of life are meaningless if we aren’t able to harvest salmon,” Whitener said.  “Protecting and restoring salmon habitat is the most important thing we can do to restore coho and protect our treaty right to fish.” 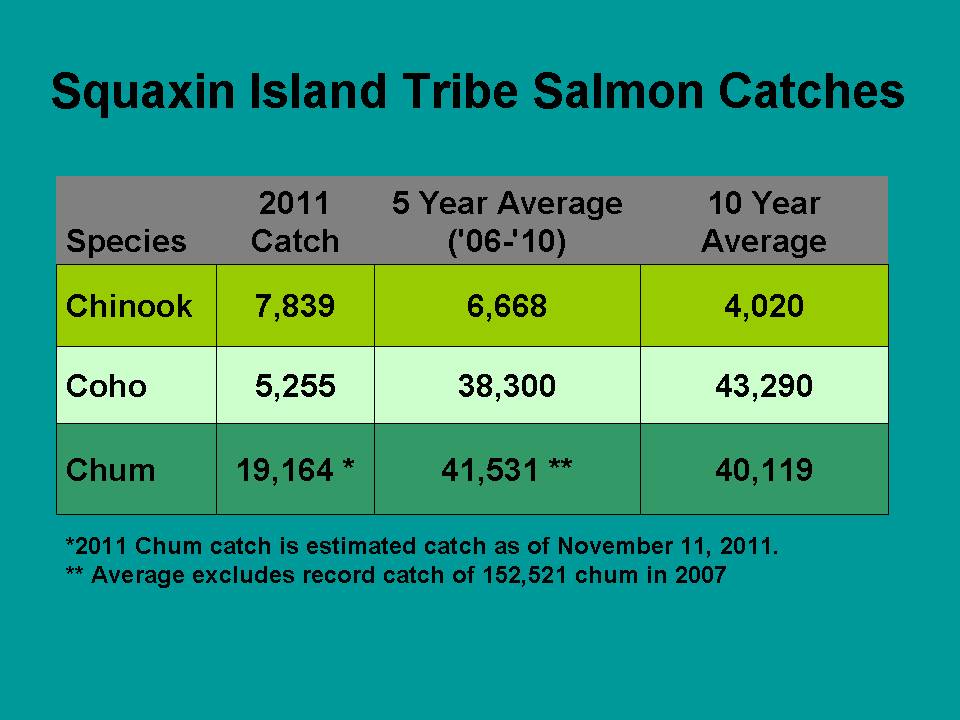 The Squaxin Island Tribes salmon fisheries started off slow but appear to be at or above recent year averages, with exception of coho.

Our harvest of Chinook was above average at 7, 839.  Approximately 4,968 Chinook made it past our fishing efforts to Tumwater Falls Hatchery.  Tumwater Falls reached the needed egg take goal to continue production for our Fall Chinook run at 4.6 million eggs, as well as 2 million egg surplus to support other programs of need.

Coho for the second straight year was dismal.  We harvested 5,255 coho in 2011.  This number may be bigger given that a number of fishermen sold fish over the bank to theTeamstersBeachvisitors, sport fishermen and others.  It is not too late for fishermen to report over the bank sales by calling the Squaxin NR office.  Coho returns for the entirePuget Soundhave been at all time lows for the past two years. PoorOceansurvival and poorPuget Soundsurvival when our fish are released from the Net Pens are some theories to as why we are seeing low returns recently.

Ancient clam gardens and deepwater sand lance habitats are just two of the many varied topics that were interesting at the biennial Salish Sea Ecosystem Conference held in Vancouver British Columbia this October.

Researchers fromSimonFraserUniversitylooked at the effectiveness of ancient shellfish gardens created onQuadraIslandinBritish Columbia.  In these gardens, first nations’ peoples cleared rocks and small boulders down to the low ends of beaches to construct a sill.  These cleared areas filled in with smaller sized sediment particles and created areas of higher quality clam habitat. The sill wall also acted to deter some predators and was thought to increase larval retention.  When coupled with the first nations’ husbandry practices of removing predators to increase survival and removing competitors to increase growth they achieved clam aquaculture in a form that is not much different from what is practiced today.

Another interesting presentation was of a study using acoustic multibeam ecosounder data, seafloor video, and sediment samples to identify and sample subtidal habitat in the San Juan Channel of the Pacific sand lance.  The sand lance is known to utilize near shore sandy substrates for burrowing emerging in daylight hours to forage in open water.  Sandy upper intertidal beaches are used by adults for spawning and egg deposition.  With this work, the natural history of the Pacific sand lance in its subtidal habitat has been greatly expanded.  A predictive model that uses seafloor characteristics of sediment wave fields was developed to locate potential subtidal sand lance habitats.  Densities of sand lance captured in this study were much higher than what has been reported intertidally, averaging 84 fish/m2 rather than only 5 fish/m2.  What I found the most intriguing was the collection of a single sand lance egg found in one of 59 samples.  This could indicate a low density late season subtidal spawning area that could be considered a “critical” habitat or just be an anomaly.

Overall the conference presented a wide variety of interesting topics and studies about theSalishSea, its inhabitants, and how they interact with each other.  The Salish Sea Ecosystem Conference was an excellent opportunity to hear from and collaborate with researchers, policy makers, and natural resource managers.

One of the talks at the recent Salish Sea Ecosystem Conference showed how common household pesticides that are considered safe individually are lethal to juvenile coho when they are combined. The author found that the mixing of chemicals was either additive or synergistic meaning that the pesticides reacted with each other to become far more potent then if they were acting alone. Several mixtures that they looked at were found to be 100% lethal to coho.

Since 1996 the Environmental Protection Agency has mandated that chemical mixture testing be done for human health risks. However, in the aquatic environment the testing for chemicals is done only in isolation even though sampling of streams has shown that over 90% of the time multiple pesticides are found mixed together. Other studies have shown that coho essentially disappear from streams when the percent of impervious surface in the watershed reaches 10-15 percent. If legal and common household pesticides are part of this problem then recovering or protecting streams will be a much bigger challenge than previously thought.