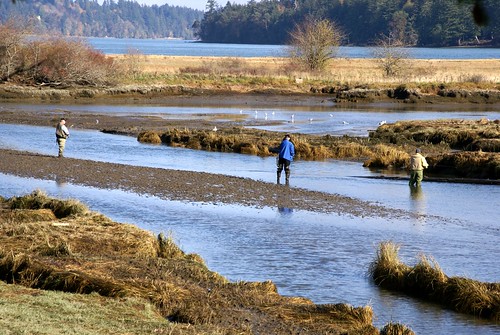 This Thursday morning, CLAMP will discuss how the restoration of the Deschutes Estuary would impact recreation around where Capitol Lake is now.

A draft chapter of our Alternatives Analysis outlines the options. It pretty basically says that certain docks would be high and dry during low tide and that different sorts of fish would be available because a freshwater lake is different than a estuary. For example, the non-native bass that prey on salmon smolts wouldn’t survive in an estuary.

One thing the chapter doesn’t spell out is the benefit to fishermen, most obviously hook-and-line sport fishermen. Anyone can take a look at the crowds along the estuary of nearby Kennedy or McLane creeks in the fall and see the interest that those fishing opportunities generate. Access to these tidelands, which would increase if the Deschutes Estuary were restored, would benefit sport fisherman access to returning salmon. Over 10,000 chinook returned to the hatchery on the Deschutes River this last year (here’s a pdf of the state’s hatchery report).

You can read the entire draft chapter here or download it here.

Publish at Scribd or explore others: