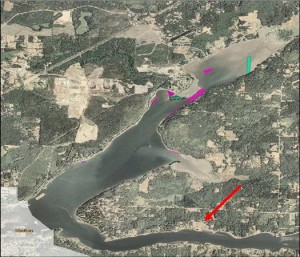 During the summer of 2008 Squaxin Island Natural Resources Shellfish employees conducted shellfish population surveys on several privately owned tidelands in Hammersley Inlet (Figure 1).  This area had previously been closed to harvesting due to some form of pollution (see http://www.doh.wa.gov/ehp/sf/default.htm for more information on area closures).  The recently upgraded approved status allowed us to identify the area and determine if a commercial density of clams occurred in this area. 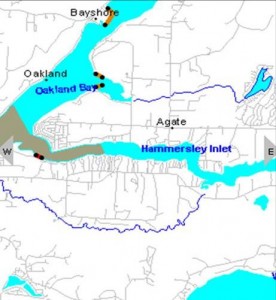 Other private Tidelands fall within a pollution closure area and are not safe for commercial harvest and subsequent consumption (Figure 2).  This is why we can harvest clams from some beaches and not from others in this particular area.

Harvesting from private tidelands is different than harvesting from areas like Squaxin Island or state held beaches like “the Dikes” or “the Westside”.   While a lot of planning must go into all commercial clam harvests, planning a private tideland dig takes extra work.  In some cases we communicate and coordinate with growers that the tideland owner has hired to “manage” their beach.  Sometimes we coordinate the digs with the owner.  Either way, a lot of planning must go into the event to ensure that all parties are informed.  Squaxin Island Tribe has rights to half of all naturally occurring shellfish on these particular tidelands.  Our goal is to ensure that we harvest our treaty share, while maintaining good relations with homeowners and hired growers.  Private tideland digs are also different because we must treat each private tideland as a separate beach (Figure 3).  Each beach has defined boundaries (property lines), and each tideland has a different available biomass (amount of clams we can harvest). 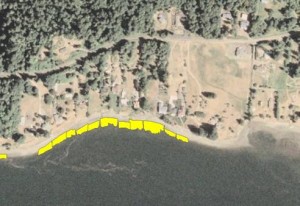 This is why it is so important that we only dig in certain areas (within marked boundaries) and only dig the predetermined amount of clams on each separate tideland.  Harvesting outside of these boundaries is something we do not want to do, as that action could lead to legal problems for the tribe and ultimately less revenue for the tribe and tribal members.

Conducting treaty harvests on private tidelands has the potential to be a valuable asset to Squaxin Island Tribe.  As shellfish growing areas become approved within our Usual and Accustom area, we could potentially harvest our treaty share in those areas.  More clam resources equal more revenue for tribal members and that is something we are promoting through these clam digging opportunities.