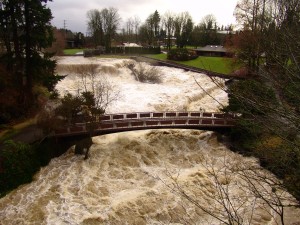 The January Deschutes flood has some similarities and differences with the flood of record on January 9, 1990.  The total volumes of water moving through the system in 24 hours were similar, but the peaks and durations of the flood flows were quite distinct.

The 1990 storm was a very intense event that dumped alot of water over a relatively small area in a short period of time.  The situation was exacerbated by the inability of several old wooden culverts in the upper watershed to adequately pass the water.  When they eventually gave away, it sent a torrent of water down the valley at resulted in the highest peak flow in the nearly 60 years of record.

The 2009 storm was much more widespread and was more of a rain on snow event that lasted for a much longer period of time resulting in a longer duration of high water.  When the waters recede, we will survey the damage to fish and wildlife habitat.  Fisheries are still suffering from the sediment that entered the river in the 1990 storm.