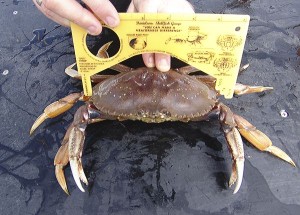 Early morning on November 20th the Squaxin Island Tribe’s commercial Dungeness crab fishery will open in south Puget Sound. This includes all of the marine waters south of the Tacoma Narrows except for the Nisqually Reach and Balch and Drayton passages. The fishery will be open seven days a week from one hour before sunrise to one hour after sunset and is expected to run through the end of February before crab shell hardness drops off. However, the fishery may be extended beyond February if the crab remain hard as indicated by weekly shell hardness testing.

The Squaxin Island Tribe has not commercially fisher for crab since 2005 and this season the number of Tribal members participating in this fishery is expected to be low. However, there may be areas of high pot densities since each commercially licensed fisher may use up to 50 pots.