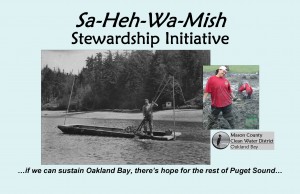 Background:  the county surrounding Hammersley Inlet was named Sa-Heh-Wa-Mish in 1853 to honor those already living there.  The county name was changed in 1864, but still encompasses Oakland Bay—a natural resource vital to the ecologic and economic health of Puget Sound, Mason County, the shellfish and timber industries, the City of Shelton and the Squaxin Island Tribe. 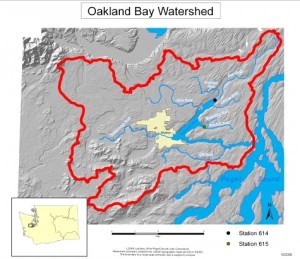 The shellfish industry is one of the largest employers in Mason County and Oakland Bay represents a robust resource for the entire state.  The value of shellfish harvested from the bay exceeds $10 million.  This includes over three million pounds of clams and nearly two million oysters.  Over 200 tribal harvesters make part or all of their annual income there and 2,000 recreational harvesters visit the bay every year.

Although the watershed is relatively undeveloped, its geography makes it extremely sensitive to human activities.  The bay itself is a small, relatively broad and shallow estuary with a large intertidal zone.  Only a small amount of bay water makes it out to the rest of South Sound on each tidal cycle because of the narrow constriction formed by Hammersley Inlet.  Instead, the majority of Oakland Bay’s water re-circulates between the bay and inlet.  This slow exchange of water allows pollution from the uplands to linger for long periods of time.

The prime pollution sources diminishing water quality are straightforward—pathogens and bacteria from failing onsite septic systems and livestock/manure.  These issues coupled with habitat alterations and increased stormwater runoff have limited the capacity of the landscape and vegetation to filter and buffer such pollution. 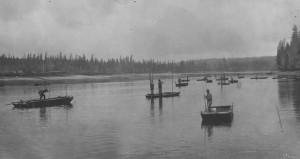 Solutions for the immediate problems in Oakland Bay are far simpler than for much of the rest of Puget Sound.  There is not a dissolved oxygen crisis and any toxic contamination is likely limited to Shelton Harbor.  The necessary best management practices are well understood—they only need to be implemented.

Sa-Heh-Wa-Mish Stewardship Initiative:  key to restoring Oakland Bay is working with private landowners and assisting in the implementation of land stewardship practices that limit contributions of pathogens and bacteria.  To achieve such an outcome, a broad-based community action coalition has formed the Sa-Heh-Wa-Mish Stewardship Initiative.  It is funded by a grant from the EPA Region 10 West Coast Estuaries Initiative to the Squaxin Island Tribe and involves many partners throughout the community. 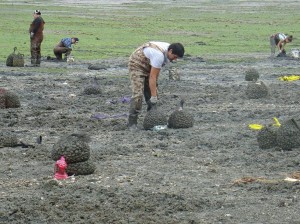 The initiative objective and measure for success in Oakland Bay is to perpetuate shellfish harvest, and this requires the whole watershed be healthy.  The coalition is committed to providing technical assistance and best management practice incentives to foster good stewardship practices and improve fish and wildlife habitat.  Innovation through promotion of low impact development and nearshore conservation to decrease the environmental impact of future population growth is a complementary action.

Credible science is an important ingredient for the initiative.  The Squaxin Island Tribe arranged to work with EPA to use DNA to identify fecal bacteria sources for corrective action, and is currently investigating the role of wind in re-suspending fecal bacteria growing on intertidal sediment.  The coalition’s commitment to science will continue with a program of effectiveness monitoring to assess the achievements of the Sa-Heh-Wa-Mish Stewardship Initiative.

Oakland Bay represents a tremendous opportunity for biological recovery within Puget Sound.  With all the right elements for a highly successful outcome—the leadership, an energetic and broad-based community coalition, engaged citizens, an action plan, relatively intact landscape and the necessary science—a healthy Oakland Bay is within our reach.